The following agreements – in accordance with the hour hand of the clock – apply here: 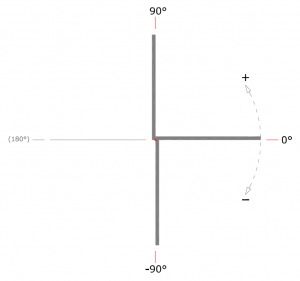 Left part of the page: Cover positions such as those which could occur with a ‘Lying’ Cover:

Right part of the page: Cover positions such as those which could occur with a ‘Hanging’ Cover:

Do not just accept the inclinometer or smartphone reading as the actual cover angle.

Cover angles can also be determined by measuring and calculating.

In what ways can such a measurement be carried out and how the calculation is then done, is illustrated in the following examples:

S = Hinge side of the Cover

L = Length of the Cover

Tip! First copy the calculation from the example so you know whether you have understood the process well.